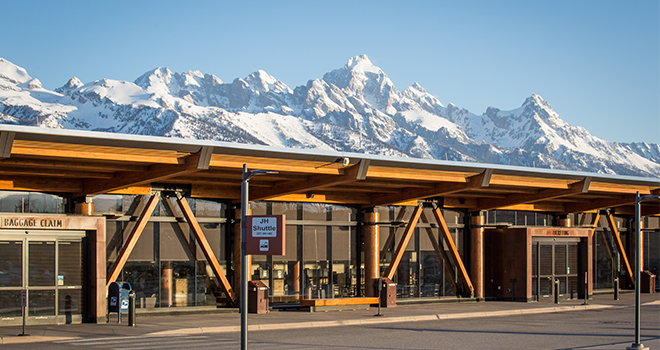 In September 2019, Jackson Hole Airport became the most recent location for business aviation operators to sample sustainable aviation fuel (SAF) provided by Michigan-based Avfuel. “We’re committed to raising awareness on the viability of sustainable aviation fuel,” said Keith Sawyer, manager of alternative fuels for Avfuel, “We hope that events such as the demonstration at Jackson Hole Airport will raise awareness of SAF and encourage further production in the fuel supply chain.”

SAF burns cleaner, reducing carbon emissions released into the atmosphere. 7,300 gallons of SAF was available to fuel operators flying in and out of the Jackson Hole FBO during specific demonstration days in September. Jim Elwood, Jackson Hole Airport’s executive director said, “We look forward to the day when using this cleaner, more efficient fuel will set standards, not only for our airport but also for airports and aviators around the globe.”

Flying into the Jackson Hole Airport is an awe-inspiring experience as it is located entirely within Grand Teton National Park at the base of the spectacular Teton Mountain Range. Private Jet Services (PJS) is a frequent user of the airport’s FBO, which is a 35-minute drive to Jackson Hole Mountain Resort and the award-winning Hotel Terra Jackson Hole.

PJS joins key influencers in the aviation industry in the quest to reduce emissions and continually seek new ways to offset our carbon footprint.